In Search of Dignity

With the Universal Declaration of Human Rights, it was declared that any person should have the right to freedom of movement and residence within the borders of a state, as well as the right to leave and return to a country. With increasingly tight visa policies, as well as other legal and procedural barriers, the access to this right is hampered for the majority of the world population. This study explores these impediments in an analysis of the laws and structures in place.

Violated rights are restituted by law, however, when states fail to draft appropriate legal texts, as in the case of Tunisia, it is on the international community and civil society to assure access. Tunisian law does not provide a specific text or system to defend the rights of irregular migrants. The only text in place regarding migrants/foreigners, is that which delineates that foreigners are required to obtain a residence permit after 3 months of staying in the country. However, these residence permits are difficult to obtain, and constitute a serious barrier for immigrants regarding gaining an official legal status. Furthermore, sub-Saharan migrants seem to lack information on their rights regarding permits.This leaves migrants vulnerable at every level, whether it is on an economic, social or ethical level.

A big part of sub-Saharan migrants coming to Tunisia become victims of exploitation, sometimes during their travel, but often while residing in the country. In cases of abuse, migrants often fear to file official complaints with authorities. Sometimes they are stripped of their passports by their abusers, putting them in a vulnerable position and denying them their right to leave. Being undocumented in Tunisia, means no legal access to health care for migrants as well as their families and forces sub-Saharan migrants to make use of expensive private clinics that have a ruining economic effect on these families. On top of that, female migrants report physical abuse and rape by their employers who blackmail their victims into sexual acts, threatening with calling the police.

After a 2003 summit in Tunisia, where the Maghreb states were heavily criticized for their policies regarding irregular migration, Tunisia – in an attempt to better their relations with the EU – virtually criminalized all elements of irregular migration networks. In effect, this means for irregular migrants, no access to basic rights such as equality, freedom, security and physical integrity. The criminalization comes with psychological impacts on migrants, who find themselves in fear of being deported at any moment. Therefore, this fear, which is an outcome of the legal system, functions itself as an impediment to the access to justice by holding back migrants when it comes to demanding their rights.

Regarding detention and fair trials for migrants, Tunisia seems to lack adequate legislation. Deadlines and bureaucracy make it almost impossible for sub-Saharan migrants to gain access to a fair trial. Furthermore, lawyers are reported to be incompetent and ignorant of the rights of irregular migrants.

The Tunisian state, rather than supporting its most vulnerable inhabitants, have instead been ratifying repressive legislation leaving migrants in a place of subordination. Access to justice means access to dignity, and the state carries a responsibility in granting migrants their basic human rights, whether with the help of civil society or from abroad. Based on this research, the following recommendations were formulated: Tunisia needs to 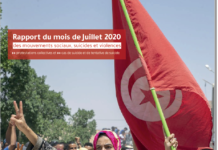 Thwarting social protests and the Project of irregular immigration