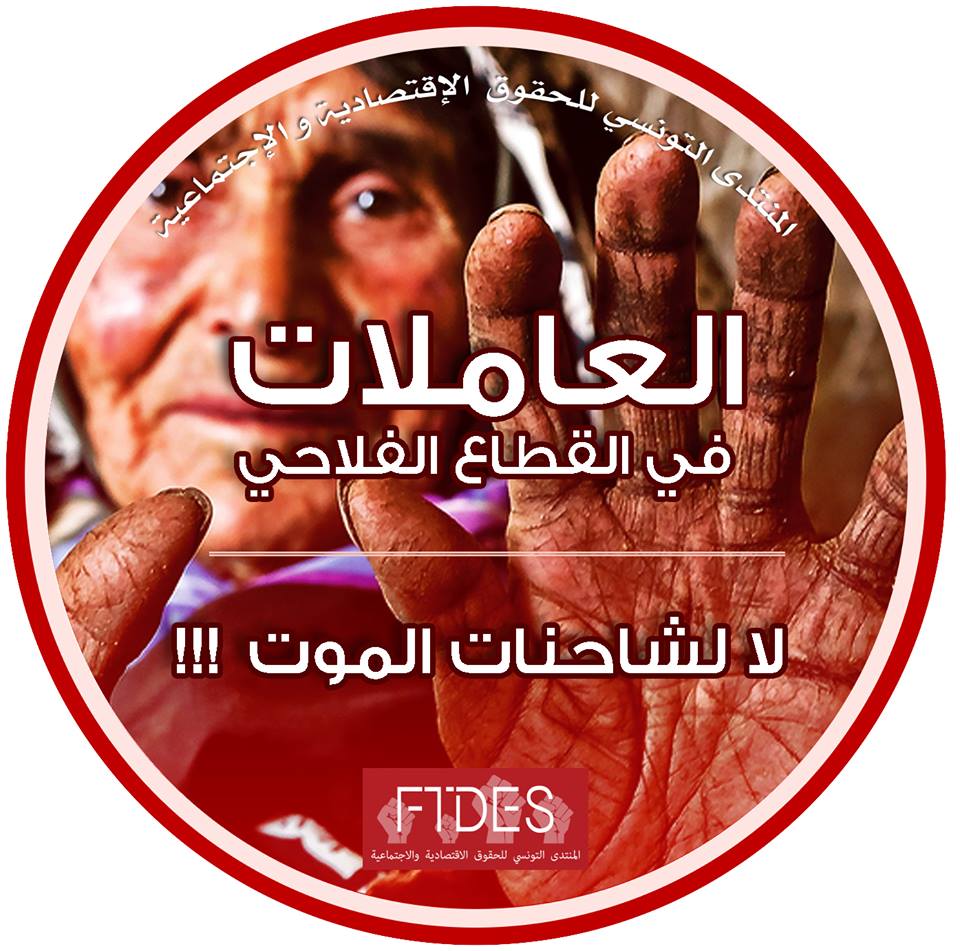 Trucks of No Return: transportation on the rhythm of death and the shameful silence of the state

Amid the voices protesting against the economic and social conditions,  criticizing the State’s policies and the Government’s failure to manage the crisis of covid-19 ; and  condemning violence against  women and youth  in the private and public spaces and under the dome of Parliament, the voice of the most vulnerable and marginalized groups ;unsurprisingly ; disappear  to only appear in traffic accidents’ headlines and truck victim’s statistics. The voice  of female agricultural labourers who are unable to properly express their grievances, and unconcerned with the speeches or promises of politicians and rulers. These women ,despite their heavy burden  , continue to play a key role in the face of the different crises and exceptional circumstances in order to maintain the country’s  food security in the face of the global health crisis notably the corona virus pandemic . Each and every one of them continue to work at the same pace, relentlessly riding the truck into the fields with no regard to the ever changing circumstances and governments or to the latter’s  decisions and protocols .The only epidemic they fear is that of poverty and unemployment. For them  hunger and  the need pose a greater  danger than that of  the virus itself, especially since they live in a  State unconcerned with their plights and has no place for them in its plans and programmes. A State whose citizens suffers from poverty, hunger, marginalization, disease, repression and the confiscation of rights and freedoms. As such ,they, Like many  other vulnerable social groups, abandoned by the state , were left to fend for themselves , caught in the jaws of the epidemic and hunger.

As this  daily scene of female farm-workers riding in lorries continues in full view of everyone, the number of commuting accidents of these no –return trucks continues to escalate,  aggravating the casualty toll to include the dead the injured and those with broken limbs . On the other hand, the government continues its silence and disregard of these accidents as if it become accustomed to dealing with the tragedies by normalizing with death and co – existence with disasters.

During the last six years ,between 2015 and 2021,  We, the Tunisian Forum for Economic and Social Rights(FTDES), have registered a  number of 46 accidents of transporting female agricultural workers, leaving 652 injured (of varying severity) and 47 deaths Including 39 injuries and 6 deaths in 2020, 101 injured and 1 death until July 19, 2021. With The central western states, in particular Sidi Bouzid and Kairouan, ranking first in terms of the number of accidents and the number of victims with 26% each,  corresponding to 52% of the total number of accidents. This is explained by the deterioration of the infrastructure in these regions,in addition to its  economic and social vulnerability ,the high rates of poverty and unemployment ;its the  citizens feelings of injustice , the continuous deprivation of resources and capabilities ,along with the lack of opportunities to enjoy a decent standard of living and the most basics of life . Combined together  these factors creates a  state of insecurity and instability forcing the women in these regions to work in the fields, take risks and challenge the epidemic while awaiting serious solutions that may change their reality and preserve their dignity.

Despite the seriousness of the epidemiological situation and the rapid spread of infection and despite the adoption of a comprehensive quarantine in several states, accidents continued to occur. In Kairouan we recorded a truck overturning accident in which 12 female farmworkers were injured. This accident occurred on June 24, 2021, coinciding with the lockdown imposing on in the region. This social category ’s rebellion against the epidemiological situation and the government decisions reflects the failure of the government and its regional authorities to manage the crisis. As the decisions implemented by the latter failed to account the particularities of these fragile social groups , no specific measures were contemplated for agricultural female workers  that may help them overcome the crisis. Thus deepening their sense of fear and anxiety for their subsistence and that of their families. Forcing them  to keep working with meager protective gear against coronavirus. However, with no other option but  riding  in  overcrowded trucks,they had  zero chance of maintaining physical distancing, or even sitting until reaching the field. Resulting in corpses lying on the asphalt waiting to be retrieved and treated, to set off on another fear journey  in which their fear of the horrors of the road is replaced with that of an infection that has spread into the region’s hospitals and gone out of control.

It is worth noting that the process of transporting women in trucks continues despite the existence of Act No. 51 of 2019 concerning the creation of  a category of “transport of farm workers”. A law that entered into force more than two years ago. Thus The continuing and repeated incidents are evidence of :

First: The lack of political will to implement the law and the absence of a clear strategy that defines responsibilities, focuses the necessary mechanisms for its implementation, and facilitates access to it by the groups concerned . In addition to the blurring of vision among the various stakeholders in its application . The legislator has merely enacted the law and the government has drawn up the implementing orders and then has disavowed its duties.Depending upon  security units to impose these orders  on the vulnerable groups, the government did not provide the financial capabilities and fiscal incentives to facilitate its implementation, leaving the intervening ministries to place the blame on each other. Thus stressing the government  lack of confidence in its activation and compliance , especially in light of the current political debate and the struggle of the three authorities, which does not provide serious solutions to the people’s problems as much as it deepens the gap between them and the political class and strengthens the divisions within them.

Second: Legislation alone is not sufficient to deal with deep rooted issues and multidimensional problems  that were not understood by the legislator nor absorbed by the laws. When the nature and characteristics of each group and the dynamics of the societies to which they belong are not studied, the laws collide with a reality that prevents its application . Thus, before the enactment of laws, it is perhaps better to understand these groups,  became attuned to their living realities, to understand their concerns, questions, and aspirations, and  involve them in planning and thinking . To confirm this idea, we cite the protest movement carried out by a group of women working in the agricultural sector, originating from the provinces of Kandar and Enfidha, after the police  units prevented truck owners from randomly transporting female farmers in implementation of Law No. 51. A protest that came in response to what they considered as an act of cutting their livelihoods and the livelihoods of truck owners with whom they had different social, family and often beneficial relationships .Since the trucks’owners are the intermediary between the female workers  and the employer and the guarantor of their continued employment ,we often find the trucks’owners first backers are the victims themselves.

Truck owners claim that the conditions of transporting  set out in the Act and defined by the Government  in the  31 august 2020  order are impractical and inapplicable , burden both parties without contributing to the improvement of their economic and social conditions. Thus it is necessary to read this incident, understand its purposes, explain its motives and dismantle it in order to adopt a sociological approach in setting laws that can be implementable .So that security solutions are not the only way to enforce the law and solve problems.

Third: The issue of the transfer of women workers and the state’s  response to these accidents cannot be addressed without a genuine and radical treatment of economic and social issues, and without a development vision that enshrines a balance between the regions and eliminates poverty, marginalization and unemployment. The rights of agriculture workers cannot be addressed without addressing the problems of the sector itself and  prioritizing its issues, especially in view of its role in the national economy, as it contributes about 10% of the gross domestic product, and 11% of the Tunisian exports, and occupies about 15% of the active labor force . It should therefore put an end to the collapse that the sector has been  experiencing for years , support small farmers, reduce disparities between them and large farmers, and support them with legislation that guarantees their steadfastness and advancement in the sector.Also empowering women with investment opportunities in the agricultural sector by enhancing their ability to own land, positively distinguishing them, and supporting their involvement in the economic cycle .Without forgetting  to regulate the seasonal work of women working in the fields and in small-scale workers in a manner consistent with the conditions of decent work, such as their right to social security, health coverage and decent pay, especially since farming depends primarily on the female labour force and accommodates nearly half a million women, which is equivalent to 80% of the workforce in the sector. Actions and recommendations that were emphasized on by the Forum in a study entitled “Agricultural Small Businesses in Tunisia” carried out within the framework of the project “Reducing inequality in the olive oil value chain” implemented by Oxfam in partnership with the Tunisian Association of Democratic Women ,The Tunisian Women’s Association for Research on Development, the Tunisian General Labor Union and the Tunisian Forum for Economic and Social Rights. As the FTDES aims to contribute to reducing the economic vulnerability of female farmers and small farmers by directing political priority towards organizing seasonal work in accordance with decent work standards.

In conclusion, it has became evident that women workers in the agricultural sector cannot obtain their rights separated from women rights in general . Rights that did not go beyond mere procedures, laws and slogans, and for the most part  unimplemented in a society that harbors discriminatory ideas that perpetuate violence against women and practice it in all spaces, until scenes of violence against women are now in full view of all successive authorities and governments . Scenes that exposed the hypocrisy of a political class that made women’s rights, equality and the fight against violence against them a stepping stone towards their political gain and then to be shelved away.

The authorities’ silence and failure to protect  women’s rights  exhaust the women and kills the female farmworkers by forcing them to board the trucks of no return.

SOCIOLOGY OF THE “MARGIN” AMID THE CORONA VIRUS