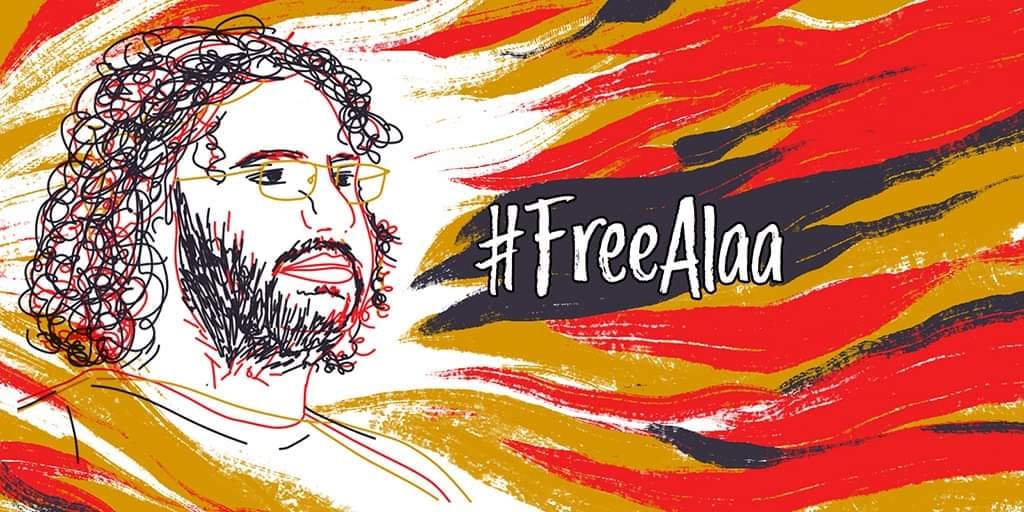 Freedom for Alaa Abdel Fattah, one of the symbols of the Egyptian revolution

The undersigned  Tunisian organizations and associations join the international campaign calling for the immediate release of Alaa Abdel Fattah, the prominent Egyptian blogger and human rights defender and one of the icons of the Egyptian revolution that toppled the dictator Hosni Mubarak on 25 January 2011.

It is utterly inacceptable that the Sisi regime continues abusing the rights of the most prominent prisoner of conscience in Egypt who is serving an unfair prison sentence despite the deterioration of his health as a result of repeated hunger strikes, the last of which has continued since last April, and despite urgent calls from the free people of the world to free Alaa Abdel Fattah -the latest of which was a call signed by 15 Nobel Prizes laureates.

Alaa Abdel-Fattah has escalated his hunger strike since Tuesday, November 1st, by refusing to consume anything but water and declaring that he will stop drinking water starting from the opening day of COP27, on 6 November. Alaa Abdel Fattah’s life is in immediate danger, and the Egyptian authorities continued refusal to address his and his family’s demands, will lead to his death.

Today, Alaa Abdel-Fattah is paying the bill for his unrelenting commitment to defending rights and freedoms in Egypt, the Arab region and the world. He was imprisoned in 2006 under the rule of Hosni Mubarak, and in 2011 under the rule of the Military Council, and his detention was renewed in 2013 under Mohammed Morsi’s rule. Alaa was arrested and imprisoned again under the Sisi regime in 2014, he spent a five-year prison sentence for “demonstrating without a permit”, and after he was released in March 2019, he was arrested again in September of the same year and remains in detention until now.

Our belief in the universal values ​​of human rights, our commitment to international solidarity, our refusal of the instrumentalization of the judiciary to harass and punish defenseless citizens whose only weapons are words, prompt us today to reject the continuation of the crime against Alaa Abdel Fattah and to join all the efforts to urge for his immediate release.

Tunisian civil society, whose voice has always been loud against the unjust policies of successive Tunisian governments and in support of all victims, and equally loud in support of oppressed activists in the world, renews its call for the release of Alaa Abdel-Fattah and affirms that it will take action in all possible ways to impose his liberation.

Accordingly, we call all Tunisian civil society actors to show their principled and absolute solidarity by joining the solidarity action that will take place on Tuesday, 8 November at 4 pm in front of the headquarters of the National Union of Tunisian Journalists.