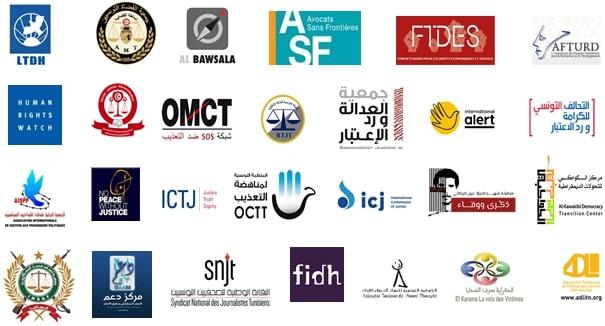 To the attention of: Mr. Fabian Salvioli

Special Rapporteur on the promotion of truth, justice, reparation and guarantees of non-recurrence

CC: Special Rapporteur on torture and other cruel, inhuman or degrading treatment or punishment

Special Rapporteur on the independence of judges and lawyers

Office of the High Commissioner for Human Rights (OHCHR- UNOG)

The Coalition on Transitional Justice, formed by 28 national and international NGOs, would like to bring to your attention the imminent threat to the transitional justice process in Tunisia. The Coalition was recently made aware of a proposal to draft a law to dismantle the Specialized Criminal Chambers in Tunisia and replace it with an institution that would effectively ensure impunity for gross human rights violations committed in Tunisia between 1955 and 2013.

The proposal, prepared by the Ministry of Human Rights and Relations with Civil Society and distributed confidentially to Parliament for early consultations with political groups, aims to repeal the provisions of the Organic Law on Establishing and Organizing Transitional Justice of 2013 (the Transitional Justice Law) establishing and governing the work of the Specialized Criminal Chambers (SCCs). The SCCs, established in 2014, have jurisdiction over cases involving gross human rights violations referred to them by the Truth and Dignity Commission, also established by the Transitional Justice Law. The Truth and Dignity Commission transferred more than 170 cases to the SCCs by the end of 2018, and trials have opened in dozens of these cases. The first trial in these special courts, which opened in the city of Gabes on May 29, 2018, concerned the enforced disappearance of Kamel Matmati, an activist whom the police arrested in 1991. Other trials concern cases of torture, rape, arbitrary detention, and arbitrary killing.

Since these trials opened, the judges of the SCCs have been performing their duties under high pressure and insecurity because several law enforcement officials have refused to secure the courts where these trials are taking place. The SCCs also encounter many difficulties in having the arrest warrants and summonses for accused and witnesses to appear before them executed.

In the SCCs’ place, the proposal envisages establishing two commissions, “the Reconciliation Commission,” and the “Settlement Commission” to which all files transferred by the Truth and Dignity Commission to the SCCs should be provided. The “Reconciliation Commission” and the “Settlement Commission” would be composed each of 9 members appointed by the president of the republic, the speaker of parliament and the prime minister, and could be revoked by the same authorities. They would have the power to review alleged gross human rights violations as well as economic and financial crimes and issue a “reconciliation certificate,” based upon which the Prosecutors in appeals courts would issue an “amnesty certificate” terminating all current or future criminal proceedings against an alleged perpetrator, and quash even final judgments delivered in cases of human rights violations and corruption, provided the perpetrator issues an apology before the Commission. Victims appear to have no role in the process. The law would, in effect, pave the way for granting amnesties for all perpetrators of all gross human rights violations over which the SCC was created to have jurisdiction.

This proposal comes at a very important juncture for transitional justice in Tunisia. On 26 March 2019, after receiving more than 62,000 complaints from victims, the Truth and Dignity Commission, published a five-volume report analyzing and exposing the institutional networks that facilitated the commission of human rights violations over the five decades preceding the 2013 Transitional Justice Law. The report contains numerous recommendations on institutional reforms, including to the security sector and judiciary, aimed at ensuring the rule of law and preventing a return to authoritarianism and widespread human rights violations. This proposal risks undoing the significant steps taken by Tunisia towards justice and accountability for past violations and establishes conditions for ongoing impunity moving forward.

The parliament voted in March 2018 not to allow the Truth and Dignity Commission to exercise its prerogative to extend its mandate by one year. Despite this vote, the Commission continued to function, albeit with difficulties. Parliament also enacted a law on “administrative reconciliation,” based on a presidential initiative, that removed certain economic crimes from the commission’s purview and ensured amnesty for some categories of corrupt former officials.

The attempt to undermine transitional justice is a reflection of the broader prevailing environment of impunity for human rights violations in Tunisia and the lack of political will to combat that impunity. Since 2011, the overwhelming majority of credible allegations of torture and other ill-treatment committed after the fall of Ben Ali and attributed to the security forces has not resulted in a prosecution.

A law giving effect to this proposal would constitute a clear violation of Tunisia’s international obligations to investigate, prosecute and punish perpetrators of serious human rights violations and crimes under international law.  As underlined in international jurisprudence, amnesties and pardons are incompatible with the obligation to prosecute crimes under international law and deny victims the right to truth, access to justice and to request appropriate reparations. By abolishing the SCCs and ensuring impunity for past violations, the proposed law, if passed, would reinforce impunity and embolden perpetrators of current and future human rights violations.

It would be a betrayal of victims’ hopes for justice to cut short these trials and terminate these and other proceedings within the jurisdiction of the SCC. We believe that a timely and public statement from your mandate along with those covering enforced disappearances, extrajudicial executions and torture and ill-treatment could be key in securing the continuation of the transitional justice process in Tunisia. We also urge you to conduct a visit to Tunisia to help oppose such looming threats against transitional justice. It is fundamental that your mandate open a channel of communication with the government to ensure the process of transitional justice in Tunisia is not lost.

Members of the Coalition on Transitional Justice

List of Members of the Coalition on Transitional Justice: