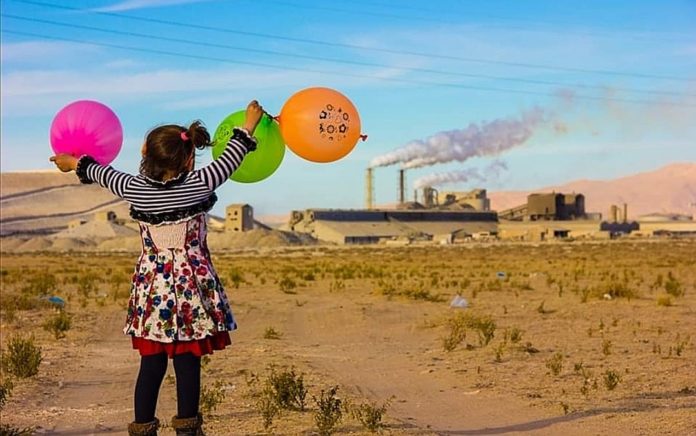 The chemical group in Mdhilla: Will the court decision erase the violation of the law?

In the mining delegation of Mdhilla, the calm that hovers over the town hides the suffering of its inhabitants. Not far from the residential housing estates, a chemical industry plant has been operating for decades without the necessary licenses, including the granting of a license to a first-class institution in the field of safety and environment. This illegal situation requires urgent intervention by State structures because of the environmental and health damage that this unauthorized activity has caused to the inhabitants of the region.

The unit of the Tunisian Chemical Group in Mdhilla is classified in the category of dangerous and disturbing institutions defined by article 293 of the Labor Code. These institutions are characterized by the creation of a threat or nuisance to the safety, health and comfort of the neighborhood, to the safety and health of their users, to public health, or to agriculture. The opening and operation of this type of establishment are subject to prior authorization from the Minister in charge of classified establishments in order to set preventive measures, in particular those related to the study of risks in order to preserve the health and safety of the environment. Within this framework, Tunisia has established a comprehensive legislative policy to define the relationship of this type of institution with the environment and human health. Numerous laws and ordinances have been issued affirming the need to protect the environmental and health rights of individuals.

The most important and clearest of these is Government Order No. 417 of 2018 on the issuance of the exclusive list of economic activities subject to licensing and the list of administrative licences to carry out a project. In this context, the licence has been defined as “the prior approval granted by the administrative authority to its applicant if it fulfils the conditions required either for the exercise of an economic activity or for the completion of a project”. As for Act No. 34 of 2007, on air quality, it aims to prevent and reduce air pollution and its adverse effects on human health and the environment, and to define the procedures needed to monitor air quality in order to embody the citizen’s right to a healthy environment. However, the population of Mdhilla continues to suffer environmental and health costs as a result of the continued operation of the plant without the required licences. The prevalence of respiratory diseases, kidney failure and osteoporosis is extremely high, as these diseases are found in a large part of the population, and the significant number of premature deaths continues. Despite the enactment of these laws and their clarity, the Chemical Group continues to violate rights and encroach on legislative rules in full view of all regional and national authorities, which seem to be deaf and dumb on this issue.

Prosecution to stop the violations

In order to put an end to regulatory violations and violations of environmental and health rights, the Mdhilla municipal council filed a complaint in January 2020 before the Gafsa court of first instance to demand, according to its president Mr. Hafedh Elhenchiri, the closure of the chemical group until it obtains the legal licenses and the assignment of experts in the field of water, air and soil to assess the environmental risks in the region.

This judicial initiative met with strong support from civil society organizations such as the Tunisian Forum for Economic and Social Rights (FTDES)-Redeyef section, a leading member of the Gafsa environmental coalition, which made a support visit to the Municipal Council of Mdhilla on 13 February 2020, accompanied by activists from the region and representatives of several associations.

The FTDES and the Gafsa Regional Coalition for the Environment each issued a press release on January 30, 2020, calling for an independent investigation that clarifies the responsibilities of those responsible for the opening of the plant without taking into consideration the environmental and health risks, and to compensate the region for the material and moral damages caused by this violation of the law, including through the full development of the town and the creation of green projects that respect the environment and create real jobs. It also proposed to initiate coordination between all parties to put an end to this clear violation of environmental rights in the region, and to force the plant to comply with applicable international and national standards. 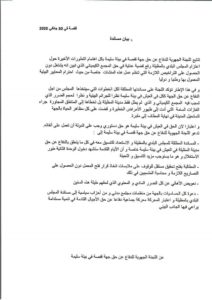 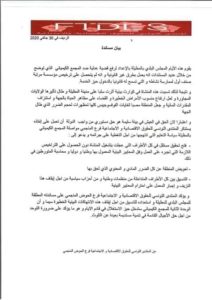 Press releases of the Gafsa regional coalition and the FTDES issued on 30/01/2020 in support of the Mdhilla municipality.

For its part, the association Cartographie Citoyenne filed an access to information request with the chemical group in order to find out which of the Group’s plants are operating without the necessary legal authorizations. The response to this request proved that the Mdhilla1 plant entity has never held a permit to carry out its activities since its creation in 1984.

Regional officials are unaware of the situation

In their official response, the authorities representing the Tunisian Chemical Group downplayed the extent of this apparent violation of human rights and claimed that the company is taking all possible precautions to protect the environment. On the other hand, no response was given to the letters sent by the municipal council to the governor of Gafsa. This environmental disaster seems not to concern him, even though its impacts threaten the future of the entire region. In a second correspondence, sent to the Municipal Council, the plant acknowledges that it does not possess the licences required by Decree No. 2687 of 2006 concerning the procedures for opening and operating the companies ranked first. However, the situation has not changed since the plant continues its activity releasing its toxins in residential areas without respecting the law or the legislative framework.

The FTDES considers that the environmental issue is not a luxury and that development based on polluting industry is to be weighed against its very significant and irremediable environmental and health costs, which deprives people of their right to life.

Recognition of the suffering of the city of Mdhilla and the whole region because of pollution must lead, as a first step, to an obligation on the part of the State to stop this bleeding. In a second stage, compensation for the region for all the damage suffered for decades must be decided, through a strategy of spatial planning allowing a dignified human life, especially after the decision to install a second unit of the group in the region, which will worsen the environmental and health situation.

However, in view of the attitude of the authorities, and despite the many promises made over the years, the chances of these requests being fulfilled seem very low.

This is why the FTDES calls on all local actors who are aware of the seriousness of the situation to refuse the installation of polluting projects in the region and insists that the high percentage of unemployment and the backwardness of development characteristic of the region must not justify recourse to the polluting industry which has destroyed the environment and the right to live in a healthy environment.

Thus, by monitoring and reporting this flagrant violation of human rights, the environment and health, in the delegation of Mdhilla and the neighbouring regions, the Tunisian Forum for Economic and Social Rights continues to fully support the position of the Municipal Council. It also confirms its support in the coming days to the Municipal Council of Mdhilla for a trial against the environmental violations committed by the Chemical Group and calls, in this context, on the judicial authorities to ensure respect for the supremacy of the law and fundamental rights, in particular article 45 of the Constitution, which guarantees the right to live in a healthy environment.