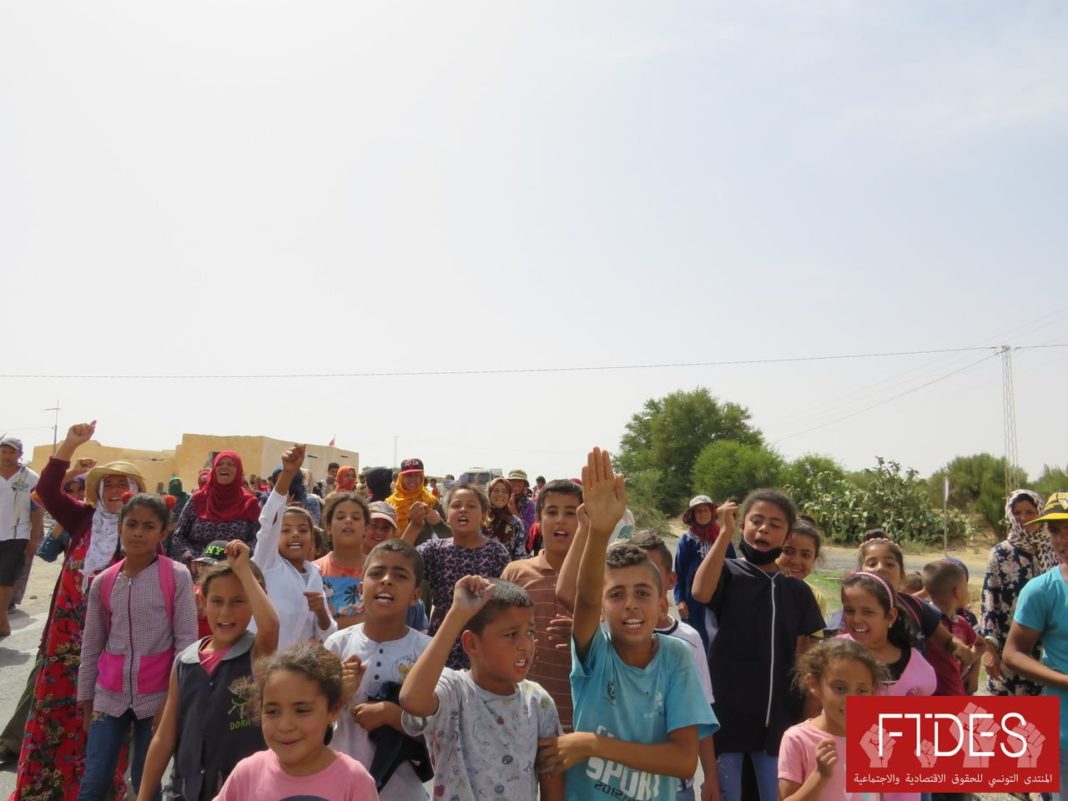 Marginalization and collapse of the public school in Tunisia:

Have we been facing a class education that enshrines inequality between children of different social classes?

The past few weeks have brought intensive discussions and negotiations on the conditions surrounding the return to schools. Only a few days after students went back to classes, many parents were challenged and protests were initiated to demand improvements in some elementary schools and to ensure that they are prepared to meet the most basic needs of the pupils as part of their education. Activists also shared images on social media websites showing the collapsing ceilings of some public schools, the absence of educational staff and of transportation for thousands of students living in rural areas and the lack of potable water in many educational institutions. These conditions create a favorable environment for the rapid spread of the virus due to the lack of water-based prevention measures and actions taken by the government in response to the epidemic. In many areas, parents have been tempted to boycott the return to school, especially since the fear of the spread of the pandemic persists despite the marked improvement observed in the past period.

In October 2020, the Minister of Education Fathi Slawti declared that there are 1415 elementary school in Tunisia that are not connected to the network of the National Company for the exploitation and distribution of water. 461 educational institutions are experiencing problems and disruptions in the supply of water.  In the governorate of Kairouan alone, of the 313 elementary school in the 2018/2019 school year, 175 did not have access to water, according to a statement issued by the Tunisian Forum. The numbers are expected to increase, especially in light of the political quarrels in the country over the past ten years, which have diverted attention from public education as a priority in the work of successive governments. This situation has led to an escalation of the rate of protest during the start of this school year, which has spread to almost all governorates of the republic, bringing the interior regions in the first ranks. On September 17, 2021, the people of Al Ryashia in the governorate of Kairouan held a demonstration, following which the road to the governorate of Sidi Bouzid was closed in front of the elementary school “Al-Ajaina”, in order to demand improvements and access to drinking water in the school, as well as the improvement of agricultural routes leading to it in order to avoid accidents that threaten the safety of students. The governorate of Kairouan is not the only one to complain about the problem of water shortages in schools, meanwhile, parents in the delegation of Sbitla, governorate of Kasserine, are keeping their children from attending school because of the lack of water.

In Tamaghza as well, parents of the preparatory school pupils continued to disrupt classes until the beginning of the current month, due to the absence of the cook in charge of preparing meals for students living in remote areas, as well as the absence of an educational and administrative framework for the students.

In the area of Ryashia, in the governorate of Kairouan, in an isolated school without fences and guards, students were trapped for hours in a dangerous situation, expecting the roof of the classrooms to collapse due to the poor infrastructure and the lack of any renovation since the construction. These are indications of the extent of the risks surrounding the public school and the low quality of education offered there, which led the students and the educational staff to avoid the location, which would affect its value as an educational space.

This issue does not only concern one region from the north or the south of the country, but it is a widespread phenomenon that requires serious measures and effective treatment to improve the standing of the public school. This is continuing after more than 03 years since the government promised to implement a comprehensive program for the maintenance of educational institutions, with funds estimated at 500 million dinars, which will allow the renovation of many elementary school as part of a program to improve the education sector. In September 2021, the Office of the President of the Republic approved the establishment of a committee on the maintenance of educational institutions and the allocation of 50 million dinars to the work of the committee, as stated by an official of the Ministry of Education, Wejden Ben Ayed, to a private radio station. The figures remain on paper while the real situation of the rural schools remains unchanged.

Marginalization of the public school: a systematic policy to privatize education

International laws require that all states use all available resources to fulfill the basic right to education for all children. However, some governments underestimate or fail to invest in the right to education to best meet the basic needs of the student, namely, education and health, providing water and protection through school infrastructure. This decrease in investment in public education deprives children of one of their basic rights and prevents thousands of them from going to school, as is the case today in Tunisia.

The situation in public schools has led to an increase in the dropout rate, with approximately 280 students dropping out of school every day, or more than 100,000 students per year, so that in the last ten years the total number of dropouts has reached approximately 1 million, in both elementary and secondary schools, due to poor conditions in school buildings, the distance to rural areas and the unavailability of basic protection for the student. Violations and widespread legal practices are entrenching inequality and discrimination in terms of access to knowledge, and also depriving children of education, which is a fundamental right to their development and to be able to claim their rights. The leadership needed to resolve this crisis is still lacking, especially given the concerted efforts of different parties to open the door to private education, to become the exclusive preserve of a particular class, greater class discrimination is enshrined and the state shirks its responsibility to reform the education system, as it has become the property of the private sector.

“The decline of the state in guaranteeing quality public education and the collapse of the public school paves the way for damming the ability of the poor to attain the quality of other classes capable of producing their own high quality knowledge spaces.” This was pointed out by the Lebanese thinker Mehdi Amel in his book ‘Theoretical introduction to the impact of socialist thought on the national liberation movement’. He points out that the inevitable consequence of special education will be the production of a class education that enshrines the inequality between children of different social classes. This coincides with the economic deficit that Tunisia has experienced since the beginning of the last decade, which has led to a decline in the role of the state as an economic actor guaranteeing its citizens basic rights, such as education and health. This has affected the public school, which has been mired in classroom violence by a decline in the quality of education and a disdain for its infrastructure in exchange for the growth of private education, which has presented itself as a lifeline of knowledge, only for those who have been able to afford it. In 2017, there were 735 private educational institutions in Tunisia, providing services to more than 138,000 students[3], according to the school census published by the General Directorate of Studies, Planning and Information Systems of the Ministry of Education. The sector currently employs more than 197 thousand teachers, inspectors and administrators, representing 30.9% of all civil servants, and provides services to over 2 million students with a general budget of 6509 million dinars for 2020, according to the same source.

The figures indicate that this sector has been overthrown and has a monopoly on quality, both in the development of accredited educational mechanisms and in the provision of advanced equipment to facilitate the cognitive access of its executives, making it a refuge for the academic success of a single class.

Increasing domestic violence: the women of Gafsa are suffering!