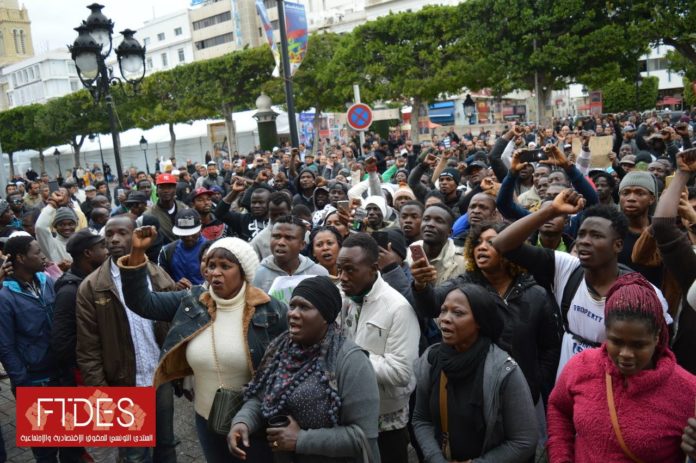 In Search of Dignity

For nearly three decades, large numbers of sub-Saharan migrant women have started arriving in Tunisia, fleeing conflict, war, gender-based violence and poverty in their countries of origin. These women either seek better job opportunities and security in Tunisia or plan on continuing their travels towards Europe. After surviving often countless human rights violations in their home countries, once in Tunisia, their vulnerable economic, social and legal situation as often undocumented migrants leave them with little protection. Threats include increasing identity checks, often entailing humiliating and degrading treatment by officials, as well as exploitation and harassment from human traffickers, employers and ordinary Tunisian citizens.

The phenomenon of violence against sub-Saharan migrant women in Tunisia and its impact on their physical and mental health stays largely neglected and/or misunderstood in public discourse. This qualitative study, conducted between September and October 2019, intends to shed light on, the forms of violence that migrants suffer while residing in Tunisia, why the access to healthcare is so limited, and whether and how Tunisian civil society positively impacts these migrants’ security.

Contact with interviewees was made with the help of two associations: the Association of African Students and Trainees in Tunisia (AESAT) and the Cultural Club Association Ali Belhouane (CCAB). The profiles included 26 women living in Tunisia without a partner, some of them with children, between the ages of 18 and 45, as well as six minors between 15 and 17. The sample was composed of workers, students, irregular migrants and human trafficking victims. Furthermore, several civil society associations were contacted including Médecins du Monde (MdM), Maison des Droits des Migrants (MDM), CARITAS, Terre d’Asile, Tunisian Red Crescent ( CRT), National Office of the Family and Population (ONFP). Nationalities included Ivory Coast, Mali, Senegal, Central African Republic, Cameroon and Niger.

The majority of subjects were in an irregular situation at time of the interview, while only a few students and domestic workers had legal status. Regarding work, most subjects are unemployed (mainly victims of human trafficking who had fled their abusers), while those who found employment largely reported poor working conditions and under-payment, often without a contract. Subjects worked the following tasks: domestic helper, babysitter, hairdresser, waitress, worker in a massage center, etc.

Generally women seemed to lack information on their fundamental rights in Tunisia and were therefore unable to mobilize support from Tunisian civil society, which in turn further degraded their economic, social and legal situation.

The violence, sub-Saharan migrant women experience on a daily basis, is at the origin of malaise and often acute depression. Violence comes from all sides and in the most vulnerable situations. The following paragraphs list the different forms of violence subjects experienced from public authorities, employers, ordinary Tunisian citizens as well as fellow compatriots.

Public authorities, rather than protecting the most vulnerable inhabitants of their country, seem to continuously resort to the opposite. This takes the form of inhumane and degrading treatment during arrests, brutal refoulement, high penalties that force migrant women to work in inhuman conditions in order to pay their debts, the obligation to pass an HIV test and general discrimination e.g. while filing a complaint which is usually based on the accusation of being HIV-positive. Furthermore did interviewees not feel like they were able to exercise their right to file a complaint in case of aggression or violence.

Interviewees often unofficial employment subjects them to further violence by employers, taking the form of generally poor treatment, physical violence, inadequate sustenance and sleep deprivation, being stripped of their papers and left with difficulties to leave the work environment and/or the Tunisian territory, harassment, sexual abuse and threats of sexual assault, forms of modern slavery in domestic households, limited access to health care, absence of social support, under-payment and gender-based inequalities in payment or employers’ full refusal of payment at the end of the month.

Subjects furthermore experienced humiliations, insults as well as physical attacks by ordinary citizens in public places. Shop owners and landlords increase prices or fully refuse to rent or sell to sub-Saharan migrant women, leaving women with limited access to affordable housing and good living conditions. These treatments are often explicitly justified by race and increase subjects’ alienation of Tunisian society and its citizens.

Human trafficking is often executed via a triangular system of actors, the first being located in the country of origin and responsible for recruiting potential female victims, which are chosen for their vulnerability to sexual and domestic exploitation. These initial actors promise money and better conditions in Tunisia, which attract their often illiterate and poor victims. The second actor lives in the country of destination, operating as an intermediary between the first actor and the final employer. When received by the third actor, the victims’ passports are usually confiscated, giving the employer total power over pay, access to health care and legal status of the victims. Interviewees described their lack of power and information regarding their basic rights in Tunisia, which often resulted in trauma and a strong sense of frustration. It should be noted that the trafficking of sub-Saharan migrant women is a lucrative business that has been increasing exponentially, benefitting from a combination of local demand and a migratory flow of poorly educated and economically weak women from the sub-Saharan regions.

While migration is a non-gendered activity, its impact on both sexes varies greatly. Women generally face additional sources of insecurity and violence based on their gender identity, located on the intersection of racism, sexism and discrimination. Sexual violence is the price many women pay for crossing borders within Africa as well as for crossing the Mediterranean. As a result, women are left with physical and psychological trauma, whether in the form of several illegal abortions or stigmatization and discrimination by their fellow citizens. Moreover, victims are more vulnerable to HIV and sexually transmitted diseases.

Regarding interviewees’ hopes and demands for the future, the following recurring statements were made; access to labor market and economic integration, regularization of residence, granting of visas for Europe, effective access to health care and the easing or abolition of residence penalties for those who want to return voluntarily to their country of origin.

Several interviews carried out with actors in the Tunisian health sector aimed at identifying the barriers faced by migrants seeking health care. They furthermore served to recommend solutions regarding migrants’ currently limited access.

The majority of health professionals confirmed sub-Saharan migrants’ vulnerability to disease, accidents, violence and abuse based on their poor living and working conditions. The following barriers to healthcare access were named: insufficient funds, exclusive policies and the absence of specific and rigorous legislation regarding the medical care of irregular migrants, general ignorance of migrants’ rights on the side of healthcare providers as well as on the migrants’ side and linguistic and cultural barriers resulting in communication difficulties, discriminatory practices.

Faced with these obstacles, migrant women resort to NGOs for support, however, these associations seem to lack adequate maternal and child healthcare.

Civil society plays a central role in the reception and support of migrants. Through coordination with other actors, they acquire basic needs such as food, health care, education, shelter, work and voluntary return to countries of origin. Interviewed representatives stated the following provided services: humanitarian, socio-medical, and financial assistance, advocating for the elimination of barriers to access to health care, awareness raising campaigns regarding issues migrants face on a daily basis as well as regarding the topic of human trafficking, promotion of protective systems for refugees, asylum seekers and migrants, assistance in case of voluntary return including the payment of penalties or granting of a plane ticket, listening, advice and orientation support, accommodation and psychological support for human trafficking victims.

Nonetheless, interviewed actors state that, without the intervention of the Tunisian state, they are unable to guarantee all economic and social rights to all irregular migrants.

Rather than the Tunisian migration laws that are currently in place, which are purely governed by a security approach, Tunisia holds the responsibility to modify these policies towards increased inclusivity and the defense of the human rights of migrants. Moreover, Tunisia needs to stay accountable for the provisions of the 2014 constitution, particularly the articles 38 and 46, as well as ratified international and regional conventions, calling for the prevention of violations against migrant women and unaccompanied minors. In addition, the decriminalization of irregular migration would contribute to less stigmatization and institutionalized discrimination by Tunisian society and authorities.

The analysis of the interviews provides the basis for the following recommendations: