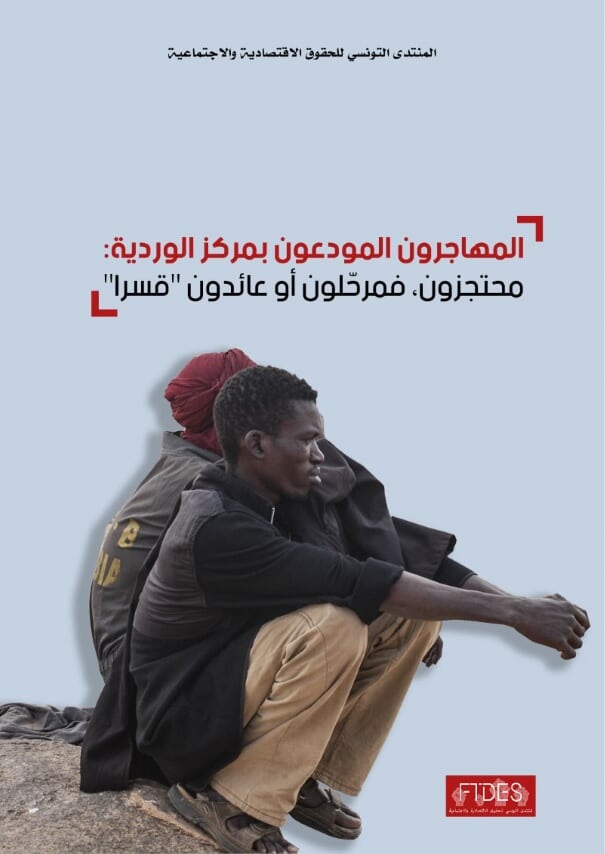 Migrants placed in the Wardia Centre:

Detained, then deported or “forcibly” returned

This research is presented in the context of the Tunisian Forum for Economic and Social Rights’ endeavors to intensify studies and research work in order to serve and advocate for migration issues in Tunisia in light of the exacerbation of this phenomenon as a result of several geographical, economic and political factors with which Tunisia has gradually transformed from a country of transit for migrants to a destination country they intend to settle in, too.

This study concluded , from a field visit to the Reception and Orientation centre in Wardia, and through the collected testimonies, dialogues and meetings that were conducted with a number of migrants who were detained at different periods in the centre and with a group of legal experts, lawyers and civil society activists interested in the issue of migration,  that Tunisia, despite the increase in the number of immigrants to or through it, especially Africans fleeing either from the horrors of war , the miserable existence or the oppression of the regimes governing their countries, still lacks any deep vision or approach to deal with the phenomenon of migration with its multiple political, humanitarian, economic, psychological and intellectual dimensions and limits itself to a pure security approach that lacks legal legitimacy and conflicts with the spirit of the constitution and with the foundations of the rule of law and institutions, and necessarily contradicts the international agreements and treaties related to the protection of refugees, as well as its inability, however, to find real and effective solutions to this phenomenon.

It can be said that the Reception and Orientation Centre of Wardia represents a true reflection of the inability of the Tunisian authorities to develop a clear national strategy with regard to the phenomenon of migration or its unwillingness to do so. As migrants are placed in this center in difficult circumstances and kept without any legal basis or judicial justification before being placed to the Tunisian borders , and in the best cases they are pushed into leaving Tunisian territory in the framework of implementing “voluntary return” programs in cooperation especially with the International Organization for Migration.

While Tunisia, like other countries of the world, has the right to ensure that its national sovereignty, regional security and borders are protected and endeavor to regulate the inflows of migrants and set the terms of their stay , the exercise of this right with a pure security approach that lacks a clear legal basis and does not take into account the specificity of the fragile psychological, social and economic situation of immigrants and the protection and rights afforded and guaranteed to them by international agreements  and the duties they impose on states  in dealing with them, raises many questions about the role that Tunisia wants to play in this field and about the image that it projects for itself. Has it really become a “guardian of the borders of Europe” and “a platform for sorting migrants to it” in light of the growing restraint of European policies envisaged in this field, or is it doing so to discourage migrants from thinking about Tunisia as an alternative to the European territories that they no longer want to receive them ??

– Statistics enabled by the Reception and Orientation Centre’s administration show that 1059 migrants were detained at the Wardia and the Ben Guerdan Centre which is under its jurisdiction in the first ten months of 2019.

– The number of migrants held at the Wardiya Centre exceeds that of Ben Guerdan during the same period (January-October 2019). The Wardia Reception and Orientation centre comprised 576 migrants, representing 44.44% of the total detained migrants, while 463 migrants were detained in the same period in the Ben Guerdan centre, with a rate of  44.56% .

-“Stealthily crossing the border” came first in terms of the number of migrants detained, followed by “involvement in justice issues” and “overstaying”. It is interesting to note that there is a reason for the detention entitled “Further investigation”, which raises many questions about the legality of detaining persons for a period that may exceed several months without charge or clear crime other than “further investigation”!

– Between January and October 2019, migrants held at the Wardia Centre and the centers under its jurisdiction carry more than 33 different nationalities. The Algerian nationality came at the top of the ranking by 36.19%, followed by the Sudanese by 16.16%, and the Ivorian by 14.45%. These rates contrast with those registered last year, with Ivorian nationality in 2018 at the top of the nationalities held by the center’s detainees by 29.27%, followed by the Algerian by 15.69%, and the Guinean by 06.30%. The percentage of the Sudanese nationality last year did not exceed 00.42%.

– The Tunisian authorities do not provide official numbers for migrants who have been “expelled”, “returned” to their countries, or “deported”. Meanwhile, a report by the International Organization for Migration reveals that it has “assisted” 584 migrants to “return” from Tunisia to their countries of origin in the context of helping “voluntary return and reintegration”.

A psychologist who has worked in the immigration field since 2011 describes the voluntary return to which detainees at the Wardia Centre are subjected to as a “forced voluntary return” explaining that detaining migrants for weeks and months, does not effectively leave them free to choose. “It is not possible to talk about a free and voluntary choice in the case of detained migrants. They are in a difficult psychological situation after a period of varying length of detention and isolation from their relatives and loved ones, and when you lose everything, your money, your documents, your work, and perhaps family members, and you are forced to leave in the end, no matter how hard you resist and stand, you will choose to return to your country instead of being deported and forcibly transferred to the border. “

The human rights lawyer and vice president of the Institute for Race Relations, Frances Weber, considers that voluntary return is only an alternative to indefinite detention and forced deportation, and the most that it can do is to make deportation more attractive and acceptable.

We emailed to the head of the International Organization on Migration’s mission in Tunisia, asking about the number of migrants who were being held in the Wardia centre among those included in the “voluntary return”, and about the possibility of talking about voluntary return of migrants who were being held in difficult psychological conditions, but we did not receive any answer to our questions.

In fact, the response came, unexpectedly, via a short message to the phone from the organization’s Public Information and Communication officer, “Hahahahahahahahahaha, I love your email.”