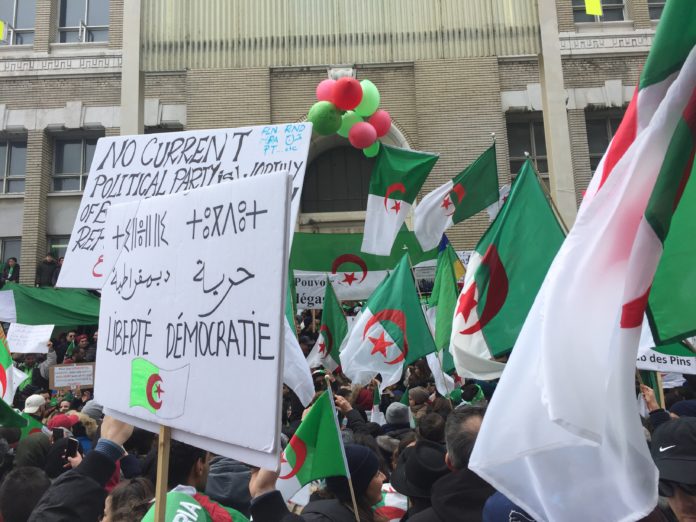 As the entire world is focusing on fighting the spread of COVID 19, Algeria is witnessing an unprecedented persecution targeting activists and journalists involved with the Hirak. With the latter being suspended from Algerian streets due to the pandemic, the Algerian government has been convicting one after the other since the beginning of March activists and journalists with procedures fully disregarding rights guaranteed by the Algerian judicial system including the Constitution and the Code of Criminal Proceedings, and opposing Algeria’s obligations towards international treaties and conventions.

Karim Tabbou, an Algerian political activist, founder of the Democratic and Social Union party (UDS) and key figure of the Algerian Hirak, was sentenced on March 24, 2020 to one year in prison by the Ruisseau Court in Algiers. His conviction procedures obviously violate the principles of fair trial guaranteed by provisions of article 56 of the Algerian Constitution and constitute a serious misdemeanor in Algerian justice. In fact, on March 24, the Ruisseau Court of Appeal in Algiers decided to hold his trial without notifying his lawyers. The trial was held in his absence. Tabbou was then suffering convulsions and a facial paralysis after a dizzy spell caused by refusal of his request to postpone the trial date. Also, refusal of the Kolea prison management on March 25 to authorize his lawyers to visit him while he was still suffering constitutes a transgression of the inviolability of the human person guaranteed by article 40 of the Constitution and an abuse against dignity proscribed in the same article.

Ibrahim Daoudji was arrested on March 16, 2020 in the city of Mostaganem while he was in his car then escorted and detained in the capital under mysterious circumstances. According to some media sources, he has been carrying out a hunger strike since March 16 and is presently at the risk of death. The absence of a lawyer during custody constitutes a violation against the principle of presumption of innocence guaranteed by the Algerian Constitution’s articles 58 and 59, and a transgression of the right of access to a lawyer as prescribed by provisions of article 60[1]. The extended and untreated hunger strike represents a flagrant violation against the right for life, an inherent right for every human being that is linked to the right for health guaranteed by article 66 of the Constitution stating that “all citizens shall have the right to protect their health.”

Samir Belarbi, an Algerian activist and one of the founders of the Barakat movement, was arrested on March 7, 2020 by police authorities and has been since then under warrant of committal. On March 25, 2020, the indictment chamber of the Ruisseau Court of Algiers rejected his request for temporary release submitted by his lawyers. For the note, he was arrested one first time on September 17, 2019 and convicted to three months in prison for “infringement of the territorial integrity” and “dissemination or detention of publications causing harm to the national interest”. He was released on February 3 by the Ruisseau Court.

Slimane Hamitouche, national coordinator of the Missing Persons’ Families National Coordination (CNFD) and SOS Disappeared. He was raised by his maternal uncle, who was abducted in the 1990s and was never found again. He has been fighting for 20 years along with families of missing persons and has become a tireless figure of Hirak. He did not miss any demonstration since February 2019. He has been held since March 7 under warrant of arrest at El Harrach prison and charged with “infringement of the territorial integrity” and “inciting crowds”. On March 25, as was the case for Samir Belarbi, the Court rejected his request for release and confirmed his warrant of arrest. This cascade of arrests targeting activists in Algeria hits with full force the freedom of demonstration previously guaranteed by article 49 of the Constitution and constitutes an intimidating practice leading to self-censorship.

Abdelouhab Fersaoui, president of RAJ Algeria, was arrested by police in Algiers on October 10, 2019 during a gathering held to support prisoners of conscience. He is charged with “incitement to violence” and “infringement of the territorial integrity.” Since that date, the court rejected all requests for his release and repeatedly extended his detention: his warrant of arrest which should have expired on February 10, was extended for four additional months by the Court of Sidi-M’hamed2. On March, 23, the same court asked to imprison him for two years with a fine amounting to 10,000 Algerian dinars (730€) and set the verdict day for April 6. According to article 59 of the Constitution, the temporary detention is an exceptional measure which then becomes an arbitrary arrest if extended beyond set deadlines.

Hadj Ghermoul, active within the Algerian Human Rights Defense League (LADDH) and member of the national committee to defend rights of the unemployed (CNDDC), was the first to raise a banner in January 2019 protesting against the 5th mandate President Abdelaziz Bouteflika. On Wednesday, March 25, he was sentenced to one year in prison and a penalty of 50,000 dinars (3730€) by the Mascara Court, knowing that he is still unemployed.

Constraints have also muzzled press activities. Khaled Drareni, an independent journalist[2], founder of the internet site Casbah Tribune and correspondent in Algeria of the international French-speaking channel TV5 World and of Reporters Without Borders (RSF), was held under judicial control on March 9, 2020 after his arrest on March 7 when he was covering a Hirak demonstration in Algiers. On March 25, the Ruisseau Court removed the judicial control and decided to hold him under warrant of arrest. On March 29, the Court of Sidi M’hammed in Algiers confirmed execution of the decision taken by the indictment chamber of the Algiers Court and held him in custody at El Harrach prison. On March 31, we learnt from his lawyer that he was transferred to the Kolea prison.

Sofiene Merakchi is a producing journalist for France 24 and RT and also correspondent of the Lebanese TV channel Al Mayadeen. He has been held in pre-trial detention since September 26, 2019 by the Court of Bir Mourad Rais for “possession of stolen goods” and “supply of images of demonstrations held on Friday, September 20 to Al Jazeera channel and to other foreign media.” He is de facto the first Algerian journalist to be arrested since the Hirak. His request for release was rejected and on March 29, 2020, the Public Prosecutor at the Court of Bir Mourad Rais requested a two-year imprisonment and a penalty amounting to five times the cost of the confiscated equipment.

Belkacim Djir, a journalist, has been held since July 16, 2019 in abusive and preventive detention with no set date for trial for a common law case. He is simply asking for the right to a fair trial.

WE, the signatories, National and International Human Rights Organizations remind the Algerian authorities that the right of expression is a vested and fundamental right for any democracy, challenging the grounds for convicting activists and journalists who simply expressed their political ideas or relayed information from a media standpoint.

It is important to mention that it is absolutely inacceptable to convict people for their political opinions or for undertaking their press duties. It is as important to remind that these oppressive practices transgress international human rights treaties that Algeria has ratified and are unconstitutional.

We join the distress calls expressed by lawyers and by the entire Algerian civil society and diaspora condemning abuse of the Algerian Code of Criminal proceedings, provisions of the Algerian Constitution and of international standards related to fair trials. We consider the non-respect of the right for life, the right for good health of detainees as well as the absence of defense, the extension of pre-trial detention, conviction of media freedom, and the intimidation of journalists to be a violation of law that shall be condemned by Algeria’s highest jurisdiction and by all various jurisdictional authorities in Algeria.

We call on the Algerian authorities to immediately release all[3] journalists and to grant them the freedom and right to report information in Algeria, and to also release all political and human rights activists and put an end to judicial proceedings.

Adala Association for the Right to a Fair Trial

Collective of Algerians in Tunisia

DAAM Center for Democratic Transition and Support for Human Rights

Lebanese Organization for the Unity and Defense of Equal Rights ‘’ LOUDER ’’

[3] According to the national committee for the liberation of detainees (CNLD), the number of detainees is about 1200. Source : https://www.elwatan.com/edition/actualite/le-cnld-denonce-lopacite-qui-entoure-ce-dossier-30-03-2020

Thwarting social protests and the Project of irregular immigration