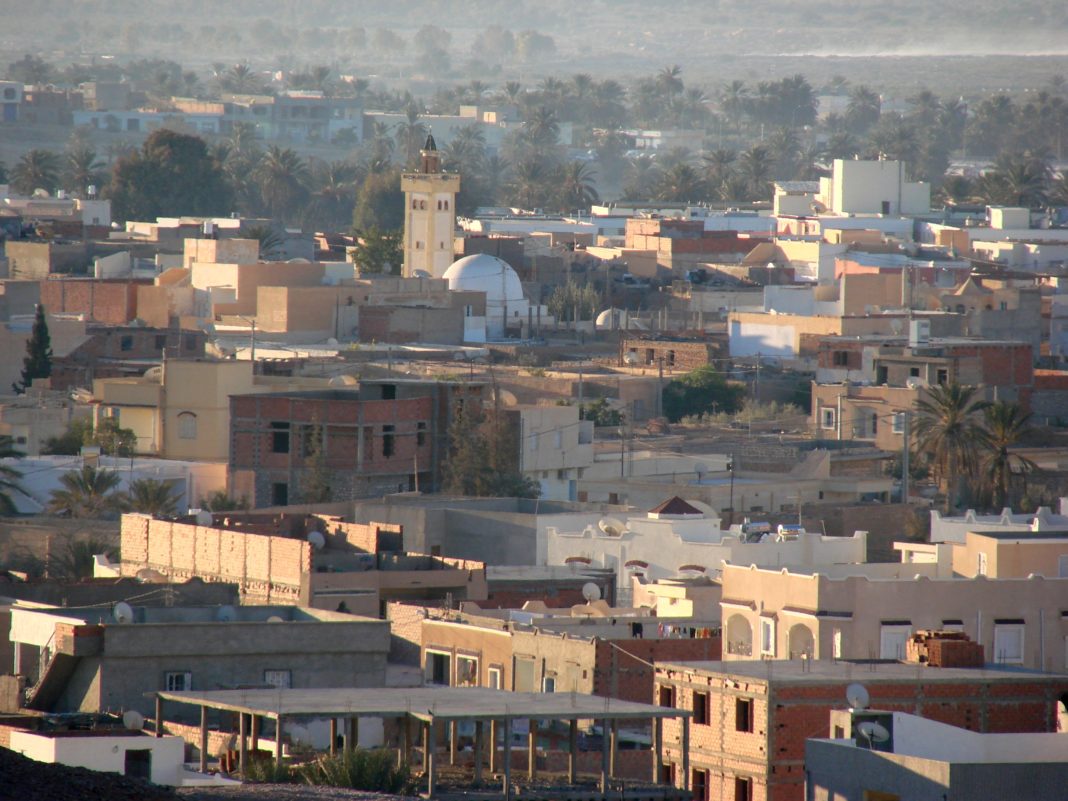 Mining delegations in Gafsa: economic and social vulnerability impede the right to a decent life!

« There can be no sustainable development without peace and no peace without sustainable development and no development or peace without human rights ». This was the slogan of the 2005 world summit, and it refers to human rights as part of human dignity, which was remarkably absent in some parts of the Tunisian Republic, including the governorate of Gafsa with its mining delegations. Unemployment, mismanagement of operational programs and the resulting social disenchantment, protests and continuous sit-ins are not the only threats to the security of these communities. There is a significant lack of resources to facilitate the fulfillment of basic rights in the delegations of Om Laarayes and Redeyef, such as health, and transportation, which have been marginalized for decades due to exclusionary policies in these areas. Thus, the government programs have failed to achieve the necessary and equitable balance in terms of the level of interest in the infrastructure of hospital facilities and the most basic sectors.

This report by the Tunisian Forum for Economic and Social Rights reveals the impact of the lack of infrastructure in various sectors on the economic and social vulnerability of the populations of these regions as well as the violation of the most important rights to life in a part of the republic due to the absence of components for a decent life.

Marginalization of the most important living rights: the right to health as an example

“The employees of the hospital in Redeyef (Gafsa governorate southwest of Tunisia) did not give me any information, except that the medical equipment and medicines I need to complete the treatment are not available here and that I have to go to the regional hospital or a university hospital to access the treatment.” With a voice and features that reflect a state of oppression, Mrs Mabrouka told us about her daily suffering of shuttling between the delegation of Redeyef and the city of Gafsa for treatment and hospitalization after being diagnosed with cancer. She says: “In September 2020, I felt some discomfort and after running the necessary tests, I was diagnosed with cancer. I had to go to the regional hospital in Gafsa because of the absence of an oncology and radiology departments in the hospital of Redeyef and the lack of a senior medical officer to supervise it. She adds: “It was not easy for me to travel by public transport. Often the bus breaks down and since I must travel, I had to rent a car on my own expense.”

The story of Mrs Mabrouka, the 60 year old mining woman, is not unique here, there are dozens of others who suffer from various illnesses and cannot afford to receive free treatment and they must, therefore, face the burden of travelling to cities or other governorates in order to enjoy their right to health. According to the Tunisian Constitution in Article 38: “Health is the right of every human being. The State guarantees prevention and health care for every citizen and provides the necessary means to ensure the safety and quality of health services. This is often impossible due to fragile health and transportation services and weak infrastructure, reflecting the marginalization of the most important rights, namely the right to a decent life, which in turn includes a range of rights. The COVID-19 pandemic highlighted this fact, as it acted as a wake-up call to the economic precariousness generated by the negligence and short-sightedness of successive governments. The great gap has grown between the legislative consecration of the most fundamental rights and the effective implementation of these laws. This gap has been aggravated by the economic and social crisis in these regions. This continues in spite of the growing interest of the States, year after year, to ensure the right to a decent life by consolidating it through numerous legal texts in most countries of the world and developing universal instruments, conventions and protocols, as well as international law guaranteeing these fundamental rights. 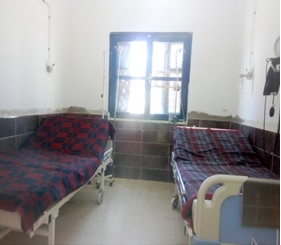 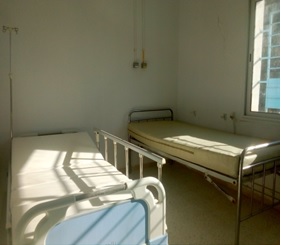 Hospital of Redeyef: Absence of certain services and shortage of specialized doctors

During the pandemic, there was a significant shortage of staff to care for patients at the local hospital in Redeyef, as well as a shortage of oxygen condensers and other medical equipment. This was pointed out by the head of radiology in the hospital of Redeyef, Hedi Boudara during our meeting held on Wednesday, January 5, 2022, where he confirmed the lack of a range of vital services in the hospital, such as the radiology service, the pediatric service, the surgical service and the obstetric service, as well as the lack of resuscitators in addition to the lack of analysis laboratories for diabetes, blood diseases and heart. These problems occur in a town having about 27,000 inhabitants and located about 50 kilometers from the center of the governorate. Although these services have been built for years, the provision of the necessary medical equipment and the assignment of specialized doctors have been the subject of expectation and false promises from the Ministry, especially in the field of surgery, obstetrics and pediatrics, this has negatively affected the quality of health services offered to citizens, which found themselves in the epidemiological waves, facing a shortage of resuscitation doctors in addition to the problem of oxygen, since a shortage of this substance was observed as a hospital need amounted to 40 to 45 bottles of oxygen per day and instead only 10 bottles per day were available. This forced the hospital staff to request the transfer of patients to the regional hospital of Gafsa, which contributed to the overflow of its capacity. For cancer patients, emergency cases are received and due to the lack of radiotherapy, they are directed to the governorate of Sfax or to the regional hospital of Gafsa for chemotherapy. This situation has persisted for some time despite an estimated budget of 02 billion and 200 million donations from the Bank of Kuwait for the rehabilitation of the hospital.

Radhwan Tabbabi, secretary general of the health union of the hospital of Redeyef, stresses that the lack of obstetric and surgical services has affected the quality of treatment and has led to the loss of human and constitutional right to health. He says that the violence against the medical and para-medical staff by the citizen has been further exacerbated due to erroneous and centralized political choices.

Marginalization of the transport sector

The health sector is not the only one to suffer from the lack and inability of citizens to enjoy their rights guaranteed by the Constitution. The transport sector has also been marginalized over the decades. And despite the many protests and demands of citizens to improve the quality of services provided in this area, the policy of procrastination and disregard faced by social demands has continued to reflect the failure of the government to launch innovative and urgent actions and strategic development programs that would end the marginalization affecting all sectors.

Buses that provide transportation for citizens in mining towns

Aida, 34 years old, mother of two children, lives in the city of Om Laarayes and works in the city of Redeyef, her daily commute between the two cities makes her wait for hours for a transport that would allow her to return home after a hard day’s work as a cleaning lady in a bank branch. She says, “I start my work at 7 am and since there is no bus between my city and the city of Redeyef, I have to wait for the bus coming from the center of the city of Gafsa for hours, but its delay caused by its obsolescence and lack of maintenance force me to absence sometimes, which can affect my work.” Aida, like other citizens, ask for a public transport service that allows travel between the two cities and avoiding them the problems of waiting or opting for private cars that work clandestinely and without a legal permit to increase the fare, taking advantage of the conditions of lack of transport to secure the transport of passengers.

The transport company in Gafsa only provides one bus, which makes two trips a day, one from the center at 6:30 a.m. to reach the city of Redeyef at 08:30 p.m., passing through Metlaoui and Om Laarayes and returning at 13:00. For the rest of the time, many people are forced to wait for hours in stations that have no facilities or maintenance, whose chief is absent, and all guidance offices are closed. These conditions force citizens to turn to renting private vehicles to get to work or to meet their needs.

The interior areas, including delegations of the governorate of Gafsa, are in front of the protests against the deterioration of the state of public transport. Citizens of the delegation of Redeyef, under the supervision of civil society organizations, the most important of which is the Tunisian Forum of the mining basin, have organized protest rallies to denounce the lack of public buses and their malfunction due to poor maintenance which they complain in many cases.

This situation continues to be while the parties responsible for their obligations are neglecting the maintenance and renovation of the bus fleet and the provision of adequate waiting conditions in public stations. 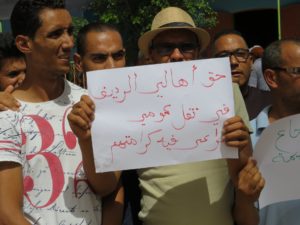 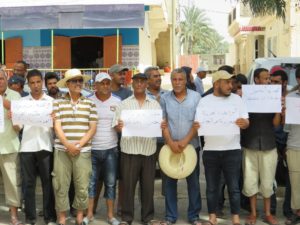 Protest against the deterioration of transportation services

Political choices are an obstacle to progress!

Today, we have to conclude a new social contract between governments and peoples, as the secretary general of the United Nations, Antonio Guterres, has said. The traditional concepts of rights that today’s policies have shaped, and which the economic and social situation of these regions has contributed to its conception, have been mainly concerned with the theoretical aspect of rights only and are not accessible and available to the population. Its translation into reality or concretization has been incomplete, making it almost non-existent. Thus, the health disparity we have seen during the pandemic and its impact on other sectors is also caused by policy choices. Covid 19 uncovered and exacerbated these fractures through a significant inability to absorb the number of patients in hospitals. As a result, these vital sectors have become a reflection of the injustice to people in the interior regions in terms of development programs and public investments due to policies based on narrow political interests and a limited definition of economic growth which have left basic human rights underfunded, creating inequalities in access to basic social and economic rights.

The obligation to respect the rights of nations requires all means to ensure that all citizens have access to their legally guaranteed rights. This commitment has not been a priority for government action in Tunisia. Today, political decision-makers must review development policies in most regions of the Republic, reflecting the importance given to the effective respect of the most fundamental human rights of citizens and to taking the necessary measures to ensure equal access to quality services in accordance with the law.