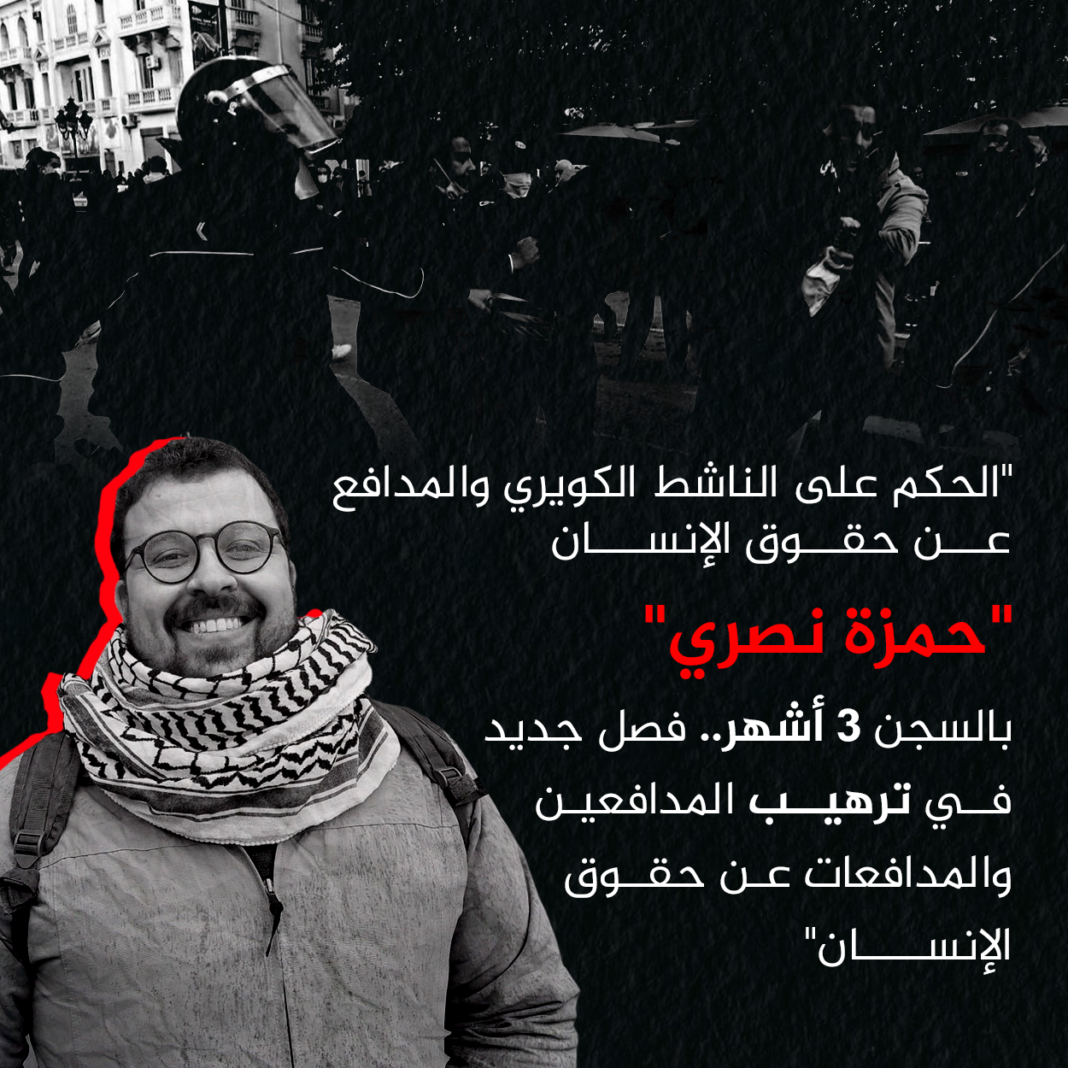 The undersigned organizations condemn the prison sentence of the queer activist and human rights defender ‘’Hamza Nasri’’ after he participates in a peaceful march dating back to 18 January 2021. The Tunis court of First Instance sentenced him to three months of prison in the case of assaulting a public servant by words and gestures under the provisions of chapter 125 of the Penal Code.

Tunisia witnessed massive protests in January 2021 in light of the country’s economic and political circumstances. During these protests, numerous human rights violations were committed by security forces against the gathered demonstrators especially in the popular neighborhoods of the various states of the Republic of Tunisia. These violations included cases of excessive use of force, violence to disperse demonstrators and protestors, intensive use of tear gas, as well as direct tossing of gas canisters into homes and onto protestors from a deadly distance. In this context, a Tunisian young guy Haikel Al- Rashdi died after suffering a serious head injury following his participation in social protests in the city of Sbeitla. Many activists were also arrested by the security forces on charges of incitement after they publicized posts on social media supporting the social protests.

On 18 January 2021, Hamza Nasri participated in a peaceful demonstration in Tunis to denounce the deterioration of the country’s economic and political situation. After the demonstration, he was followed and arrested by police agents on his way home. And, Hamza Nasri’s lawyer was provided with incorrect information from Beb Suwaiqa and Beb Bhar police stations regarding his place of detention. Hamza was afterward accused of deliberately making an inappropriate finger gesture towards police officers. During the interrogation, Hamza stated that he had participated, like other citizens, in a peaceful march calling for the improvement

of the civil, political, economic, and social rights of the Tunisian people. He added that during the rush of demonstrators he was assaulted by people he did not know to be policemen in plainclothes.

In response to Hamza’s statements, the police officers in question claimed that the activist tried to attack them and made obscene gestures towards them in the discharge of their duty.

After two trials since 18 January 2021, the first was on 09 December 2021 and the second was on 24 January 2022, the sentence was pronounced on 31 January 2022. The Correctional Chamber of the Tunis Court of First Instance has sentenced Hamza to 3 months of prison. He was tried in absentia, as he did not appear in the courtroom, which the organizations deem a blatant infringement of the procedures and a formally defective ruling.

This defection in the procedure may result in Hamza Nasri being deprived of a phase of litigation. He has been subjected to a liberty-depriving sentence based on allegations used by the State and security forces to intimidate human rights defenders.

Targeting activists in such circumstances and threatening them with such unjust sentences is a form of political violence, and an attempt to deny their right to freedom of opinion and expression.

-They reject the ruling issued against activist Hamza Nasri. These allegations are the means of security forces to intimidate activists and silence them.

The Tunisian law does not specify the exact definition of what can be considered “assaulting a public servant” under Article 125. This allows the authorities to interpret it broadly to criminalize and restrict freedom of expression.

The organizations denounce the prosecution of activists by accusing them of assaulting a public servant, which is a common and widely used charge by the police forces against citizens, especially activists, journalists, bloggers, and champions of human rights defenders, intending to silence them and criminalize legitimate individual freedoms.

The signing organizations urge champions of rights and freedoms to confront all attempts to strike freedoms and human rights.

Deadly policies in the Mediterranean: stop the shipwrecks caused off the coast of Tunisia