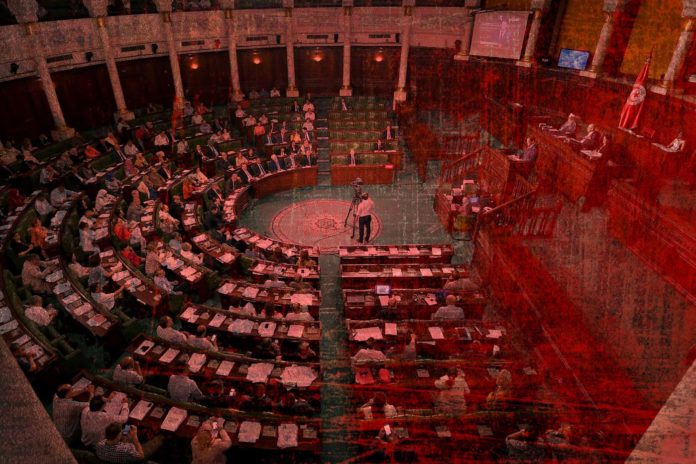 Human rights organizations and associations which undersigned below, express their deep concern at draft law No. 29/2020 on amending Articles 245 and 247 of the Penal Code provisions. As it reflects a blatant contradiction with Articles 31, 32 and 49 of the Tunisian Constitution, and Article 19 of the International Covenant on Civil and political Rights which was ratified by the Republic Tunisia.

The undersigned associations and organizations condemn the initiative party who in this critical situation which our country is witnessing, demands an urgent consideration of the draft law, which was submitted on March 12 to the Assembly of the Representatives of the People with a plea to refer it in accordance with urgent procedures rules.

The undersigned associations and organizations warn and point out that this draft law will inevitably cancel several Articles of Decree Law 2011-115 of 2 November 2011 on freedom of the press, printing and publishing, as it contains comprehensive legal provisions for the offenses of publishing fake news (Article 54) and defamation (Article 55 and 56).

The draft law also contradicts with the constitutional requirements stated in Article 49 of the Constitution, which must be respected when issuing or legislating any rule that would restrict rights and freedoms, as it contains penalties that are disproportionate to the stated criminal acts. Penalties are also unnecessary since the publication of fake news is a criminal offense under Article 54 of Decree Law 2011-115 of 2 November 2011 on freedom of the press, printing and publishing.

The undersigned human rights organizations and associations emphasize that while countering spreading and publishing fake news is legitimate. However, it should not become a means of violating Articles 31 and 32 of the Tunisian Constitution by using broad terms as the ones that were included in the draft law, such as “defamation committed by hidden persons” which would prejudice digital rights as the right to anonymity. Or other terms such as “questionable speeches” that criminalizes kind of news that is false but is not intended to harm public security or national defense and can be corrected through several legal mechanisms such as the right of reply, correction or through regulation and self-regulation institutions. This makes this legislative initiative violates the condition of legislating legal rules in clear and precise manner.

This legislative proposal also reflects a clear and serious confusion between defamation and publishing fake news, as while they share the same fundamental element, which is spreading fake news, they differ in terms of the legislative interests that need to be protected. As criminalizing defamation aims at protecting a person’s dignity and reputation, while criminalizing spreading and publishing fake news aims at protecting public security, national defense and public health. Moreover, the seriousness of this proposal is reinforced with regard to the documents annexed thereto, Where the reasons for this legislation was emphasized, these reasons, include protecting persons’ certain social and political symbols reputation which constitutes a clear violation of the principle of equality of all citizens before the law, in times where legislation generally tend to promote the latter, protect individual and collective freedoms and ensure dignity for everyone without distinction for any reason whatsoever.

In light of this legislative initiative seriousness on freedom of expression and press, on one hand, and the great violations, it contained, on the other, particularly in light of the legislative framework that criminalizes disseminating fake news, as set out in the aforementioned Decree law No. 115, the following associations and organizations call upon the initiators to withdraw it immediately.