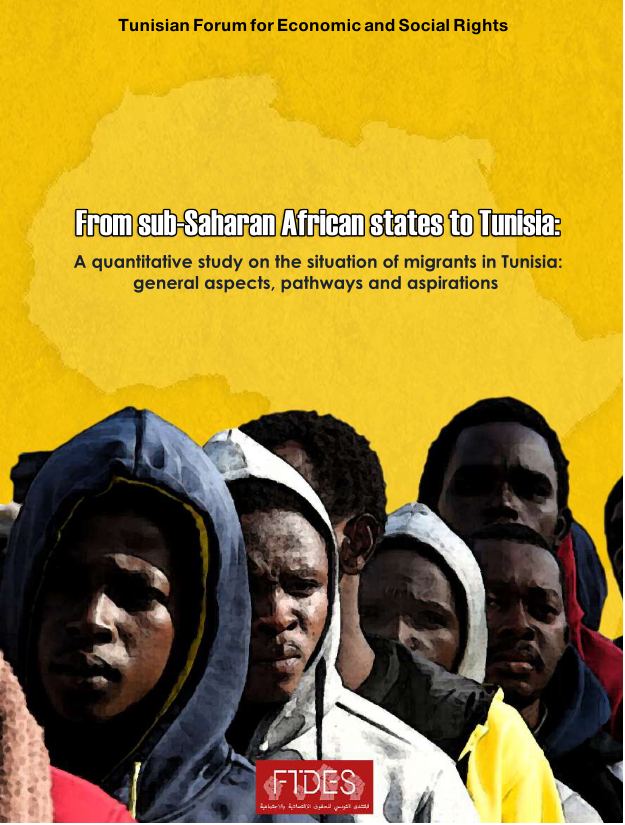 From Sub-Saharan African States to Tunisia

A quantitative study on the situation of migrants in Tunisia: general aspects, pathways and aspirations

After visa regulation were eased for several sub-Saharan countries, migration to Tunisia has been increasing significantly since the early 2000s. Research shows that the number of non-Tunisians in the country has gone up by 66% between 2004 and 2018. Another reason for the increase in numbers is the generally stable political situation beginning in 2014 with the first legislative and presidential election. The official numbers however, do not yet include the several thousand sub-Saharan “irregular migrants” residing in Tunisia. Despite these developments, research on the subject stays scarce. The extensive quantitative study “From sub-Saharan African states to Tunisia” intends to shed light on sub-Saharan migrants’ situations, whether this regards migrants’ places of residence, their jobs and families, their integration into Tunisian society or their access to social and health care services. Via a survey, handed out to 962 migrants in the time period between June and September 2019, this research aims to identify what resources are missing and what obstacles migrants encounter on their journey to Tunisia, as well as while being in the country.

The field work was carried  out by 5 researchers, four of whom are of sub-Saharan origin and one Tunisian national. Focus was laid on the seven governorates that seem to attract the largest numbers of sub-Saharan migrants: Ben Arous, Ariana, Tunis, Manouba, Sfax, Sousse and Medenine. The questionnaire was distributed to a random sample in private and public locations, including migrants’ houses, city centers, hospitals, organizations, university dorms, coffee shops, public transport, markets etc. .

Regarding the socio-demographics of the studied sample, the data shows that men no longer make up the majority of migrants, as was the case in the 1980s, but that female migrants now almost equal their male counterparts in numbers. Furthermore, 40% of subjects were minors, most of whom had traveled with either one or both parents, while a minority had arrived unaccompanied. Out of 24 nationalities, Ivory Coast was the most common origin (32%), followed by Cameroon (15,5%), Democratic Republic of Congo (14,2%) and Sudan (12,5%). When in a relationship, subjects stated to be with somebody from their country of origin. Only 1,5% had partners from countries other than their country of origin.

The number of university students (43%) exceeds any other category regarding the official status within the Tunisian system, followed by a large group of migrants in an irregular situation (24,6%), refugees (14%), migrant workers (8%) and asylum seekers (7,5%). 80% of migrants are accompanied by family members or to a lesser extent their life partners.

Many migrants dropped out of school in their countries of origin because of poverty or war or a combination of both. Nonetheless, more than 50% have a university degree which was generally acquired in their home countries. The majority of sub-Saharan university students in Tunisia were initially attracted by certain scientific specialties: management and accounting (21%), IT (14,7%) and engineering (13,5%). When it comes to state approval of foreign degrees, only 46% of migrants had their degrees approved, while 48% are unaware of their degrees approvability. This points towards a general lack of information regarding higher education for migrants.

The main reasons for migration fall into five categories: pursuing higher education, job opportunities, gaining money, security reasons or joining a relative or friends. As mentioned above, the majority of subjects are attracted by the aspect of education, while 27% seek a better economic situation and 22% come for security reasons.

From the sample, 65% had chosen Tunisia deliberately as their destination, while 34% were either rescued in the Mediterranean or intercepted while trying to cross to Europe. During their journey, 10% of subjects were forced, either blackmailed, scammed or mislead, to commit unlawful acts: out of these 10%, 61% were involved in drug smuggling, 33% joined prostitution networks. To lesser extents, migrants were involved in black market currency exchanges, arms sales and terrorist networks. These crimes were largely committed while crossing through or staying in Libya.

A large number of subjects traveled in groups (37%), composed of 60 to 80 migrants. Prior to their journey, these migrants joined transit networks which promised the cross-over to Europe.

Despite Africa’s growing economy, poverty rates have not necessarily decreased in the different countries. Neither have sustainable job opportunities been created, which explains why only 10% of migrants in Tunisia consider their economic situation in their country of origin as good. 66% of the sample’s individuals were not able to find work, while 32% found themselves in precarious and/or temporary jobs.

10% of subjects stated that they had experienced different forms of violence, causing in some cases (17%) lasting psychological and physical damage. Violence is mainly experienced due to political orientation (41%) with domestic violence being the second most often type of violence (33%).

Only 22% travel back to their countries of origin on a regular basis. The main obstacles are the high cost of travel and the persistence of a lack of security as well as ongoing war. Remittances to their families back home are not very common, which possibly derives from the fact that 60% are not allowed to open bank accounts.

The majority of subjects have good French skills, basic English skills and poor Arabic skills. 68% of subjects consider the lack of Arabic as the main obstacle to integration. Migrants’ detachment from Tunisian society can be largely explained by ongoing racial discrimination, whether carried out by the police or civilians. In fact, 51% of interviewed migrants had been subjected to racist attack, in the form of insults (90%), physical violence (34%), fraud (30%) and violations (23%). Responsible for these acts were mainly random civilians, while over half of migrants had been discriminated against by taxi drivers. 61% explicitly stated that they consider Tunisian society as racist.

Nonetheless, opinions are divided among subjects regarding their reception by the Tunisian society. While 41% are content, 40% did not feel accepted. Regarding safety, 25% stated that they feel unsafe on a daily basis.

As should be clear by now, migrants in Tunisia find themselves in precarious situations. 31% state that they consider the poor work conditions to be further weakening their situations, while 28% consider their status as an “irregular migrant” to be the cause of instability.

Only 26% of migrants are able to hold a stable job, while 35% work two different jobs, and 22% even work three jobs in order to be able to support themselves.

55% of migrants have a residence permit, while 41% do not have residence permits yet, often because of a status as refugee or asylum seeker. This is reflected in the access to public health care services, which a shocking 90% have no access to. Only 4% of subjects consider the interventions of national and international organizations (the Red Cross, the IOM, the Tunisian Red Crescent, Doctors without Borders, the League of Students and Interns of Burkina Faso in Tunisia, the UNHCR, the Association of the Students and Interns of the Ivory Coast in Tunisia) as sufficient, while the majority considers these services as insufficient or average.

After having stayed in Tunisia for some time, half of migrants were disillusioned with their situation, only 41% think it was successful. 54% expressed a desire to cross over to Europe, while 42% are planning to return to their countries of origin.

According to migrants, improvements need to be made on the social level, on the legal level and regarding their economic situation. What disturbed the subjects most on arrival in Tunisia, were the precarious job opportunities, the general disrespect and racial discrimination brought forward by the Tunisian public, the lack of assistance and information on migrants’ rights, social security, the high administrative costs ats times, the difficulties accessing nationality for their children and the difficulties in opening a bank account.