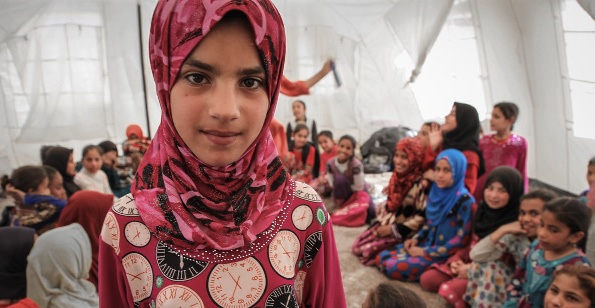 UNESCO partners with the Arab Campaign for Education for All and the Tunisian Forum for Economic and Social Rights, for the Tunisia launch of its regional report

Hotel Africa, Tunis, November 30 – UNESCO, the Arab Campaign for Education for All (ACEA) and the Tunisian Forum for Economic and Social Rights (FTDES) will bring together Ministry of Education officials, UN agencies, teachers and civil society groups to launch the first regional edition of the Global Education Monitoring (GEM) Report for the Arab States.

The Arab States 2019 GEM Report Migration, displacement and education: Building bridges, not walls examines how migration and displacement patterns impact and shape education in the region most affected by population movements. It presents a series of urgent recommendations to governments to protect the education rights of those on the move.

Forced Displacement: At the end of 2018, there were 25.9 million refugees, of whom 5.5 million were Palestinian. Despite an overwhelming response in the five countries hosting Syrian refugees, 39% of school age Syrian children are still not in education. And many are still placed in parallel systems, which are mostly unsustainable.

Tunisia experienced a huge influx of refugees when the Libyan crisis erupted. Since most Libyans did not register as refugees, their number is highly underestimated. One estimate suggested that they made up 10% of the Tunisian population.

Huge numbers of school-age children remain out of school in Tunisia. In 2014/15, over 50% of registered Libyan school-age children and youth were enrolled in primary school and 25% in secondary school, with nearly 25% out of school, mainly due to administrative or financial difficulties or having exceeded the legal school age. Due to difficulties in accessing public schools in Tunisia almost 40% were enrolled in private schools.

“Migration undoubtedly offers many opportunities, but, if education systems do not adapt to their needs, it risks wasting the skills of those on the move,” says Manos Antoninis, Director of the Global Education Monitoring Report (GEM) at UNESCO. “Countries must ensure they take the time to understand and plan for the education needs of migrants and displaced people.”

The Report highlights how many rural children work as domestic help in urban households in Tunisia. In Bizerte and Jendouba, 95% of girl domestic workers have migrated and worked far from their homes. Overall, 90% of girl domestic workers had not completed lower secondary school. Protecting such children requires free, high-quality public education and social protection, along with early intervention to curb child labour and to prevent entry into hazardous work.

International migration: In terms of total immigrant population from Arab States, the highest – and rising – shares are found in France (37%; of which 95% from the Maghreb) and Sweden (18%; of which 75% from Iraq and the Syrian Arab Republic). Immigrant students of Arab origin often leave education early or are streamed into vocational tracks. Students from Algeria, Morocco and Tunisia do worse in France. For instance, 25% of them repeat a grade compared to 15% on average.

In recent years, the percentage of Tunisians living abroad increased from 4.9% to 6.7% and those who want to emigrate is increasing. According to the Gallup Potential Net Migration Index, if all adults who wanted to emigrate were to do so, the populations of Algeria, Egypt, Morocco and Tunisia would decline by 20% to 30%.

Financial education programmes for migrants can have a positive impact on financial decisions as a study of Indian migrants in Qatar has shown. They help individuals better manage their economic circumstances and avoid fraud or financial exploitation, especially when sending remittances back home. At 45%, Tunisia has the highest financial literacy rate among Arab States.